5 Iconic Things To Do In Soho 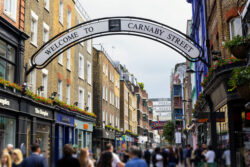 No visit to London is complete without a trip to Soho. If you’re a tourist, it’s easy to be confused by people talking about Soho. It’s often a catch-all term for large parts of central London.

Soho is a square mile area of London’s West End that you can easily explore on foot. It’s connected to some of the other most recognisable parts of London, including Regent Street and Charing Cross Road.

Whether you’re moving to London or coming on a whistle-stop tour, Soho is one destination you want to have at the top of your list. We’re sharing a little about the history of Soho and what to explore for an authentic Soho experience.

The history of Soho, London

Soho has a rich history as the heart of entertainment in London. The area was originally associated with the city’s aristocracy before turning into an entertainment area during the 19th century when theatres and restaurants began to pop up. Every corner of Soho is packed full of legendary institutions, such as the Windmill Theatre, Liberty’s department store, and some of London’s most famous nightclubs.

Book into a Soho hotel

With so much to explore in Soho, it’s worth checking in to one of the area’s many hotels. You can find everything from budget-friendly hotels like the Premier Inn to splurge-worthy bookings like the W London.

Choosing to stay in a hotel in Soho means you can navigate most of Central London on foot.

Spoil yourself with retail therapy

Soho is famous for being one of London’s best shopping districts. It’s home to Liberty, a stunning Tudor era-inspired building that plays host to one of the city’s most famous department stores.

You’ll also find a mixture of household names and independent boutiques in the colourful Carnaby area.

Step back into the past

Carnaby Street in Soho is a dream come true for fans of the swinging sixties.

You’ll find everything from vinyl record shops to vintage stores selling second-hand treasures, including pre-loved designer pieces at a fraction of the price. Why not grab yourself a bargain?

Immerse yourself in the world of theatre

As Soho is nestled in the West End, it’s no surprise that the area is home to some of London’s most popular theatre shows.

You’ll find everything from blockbuster productions like Les Misérables to spell-binding shows like Harry Potter and the Cursed Child. Escape the hustle and bustle of Soho to immerse yourself in London’s rich theatre tradition. 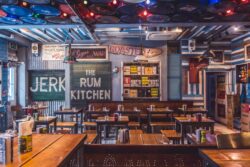 No adventure around Soho is complete without stopping for a bite to eat.

Take in the stunning scenery of Soho and refuel at our Soho location. The Rum Kitchen Soho restaurant is nestled in between two very famous streets in London – Carnaby Street and Kingly Street.

It’s perfect for a Soho Happy hour cocktail created by one of our expert mixologists and tickle your taste buds with Caribbean delights after a day of exploring Soho.