Gwan! Why you should go to Carnival 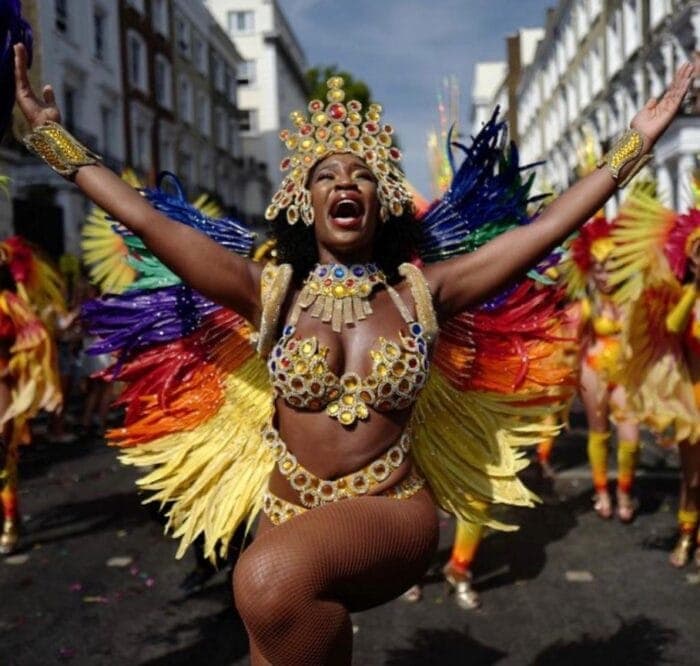 Every year – usually – in August, Ladbroke Grove gets a makeover. And so do we. We bring the feathers, the food and the rum to our very own Rum Kitchen Carnival. Being that last year and this year is cancelled, the next time we can, we plan to carry on ‘Wicked n Bad’.

Here’s a few reasons why you should also:

When and who started Carnival are hotly contested topics.

Was it Claudia Jones? Who held an indoor Caribbean Carnival in St Pancras Town Hall in 1959? Or was it Rhaune Laslett? The organiser of “The Notting Hill Fayre and Paegeant” in 1966 to promote cooperation and understanding between the various communities of Notting Hill? Or Russell Henderson, whose musical talents with steel pan attracted migrating crowds to tour Notting Hill alongside him and his band, as they played in the first Children’s Carnival in Notting Hill in 1964? Or Selwyn Baptiste, who founded the Carnival Development Committee in 1975?

The verdict is still out; however, when it comes to what it celebrates, there’s more of a consensus. The 1958 riots in Notting Hill and Nottingham highlighted the racial tensions in post-World War Two Britain. These areas saw migrant communities, especially the Caribbean community, come under physical harm at a time when Britain had not yet achieved the racial harmony it has today. The murder of Kelso Cochrane was one of the unfortunate highlights of this time, he was killed by a group of white supremacists on his way home via Golborne Road in 1959. His death is widely attributed as the spark that ignited Notting Hill Carnival.

Formalised Carnival in Notting Hill served as a remembrance that the Notting Hill residents would not succumb to racial hatred or be silenced through violence.

The Mangrove Restaurant, set up by Trinidadian restaurateur-turned-activist Frank Crichlow on 8 All Saints Road, is where the Rum Kitchen’s connection to Notting Hill Carnival begins. This restaurant was converted to the first Rum Kitchen in August 2012, but, for decades prior, it had been an informal headquarters for Notting Hill Carnival and for activists fighting against intolerance, racism, and discrimination.

What does NHC mean today?

Notting Hill Carnival is a watershed moment in British History. It spoke to, and emboldened, people’s resilience to express themselves and celebrate what they want to. A tradition which builds greater understanding, harmony, and a respect for one another’s differences. Building a more inclusive society; bringing communities together over Caribbean music, Caribbean food, and culture; and it worked.

The parallels of a people looking to build Britain to be a more inclusive and robust society can be seen by how different communities are deciding to get their voices heard. With Pride Festival being the younger NHC equivalent for the LGBT community – very possibly inspired from, to the advancement of non-traditional gender roles, to modern realties we take for granted which have changed since NHC launched in the 1960s, like interracial relationships. Undisputedly, it has brought people together.

Our own RK Carnival

You have heard of carnival bands, well, meet ours – just smaller.

In one of our venues: Brixton, Soho, Shoreditch, or, our newest venue, Brighton, we hold ours. Packed to the brim with rum punch, Caribbean food, and vibes, every year in August. The RK Crew comes in with all the colours, all the feathers, and all the style.

One of our Identity Pillars – Be More Carnival – is about liberalisation; and central to that is movement in the presence of sweet, sweet music, blaring out of sound systems, that make you forget about your worries. Ours aren’t as a big as the ones in Notting Hill, but, through the scents of ‘Jerk’ sizzle and song, we find many reasons at our carnival staff parties to move our two left feet and have a good time. And… we reward the best dressed of the day in true carnival fashion. Gwan!